Riding with the local biker communities of Sumatera had removed the getting lost factor from our daily routine, so now that we were on our own again we were once again on high alert.

When searching for hotels in a busy, chaotic city staying together becomes priority. We have lost each other a couple of times now and it is worrisome to say the least. Our helmet intercoms are out of action and so it is imperative we stay in sight of each other. Meeting at a predetermined place would work if we knew that the destination was where it is supposed to be.

So In Jambi, only fifteen minutes after leaving the care of the local bikers who had escorted us from Lampung to Jambi, we were once again in the hands of a temperamental GPS system. For some unknown reason, GPS systems find Sumatera difficult.

After saying goodbye to Sam+1, we decided to just follow the GPS and see where we would be taken even though it was  sending us down roads we thought could not possibly have reputable hotels.

“Where are the bikers when you need them?” we jokingly asked each other.

Well as we headed down a road going nowhere, a man on a motorbike pulled alongside us and asked, “Where are you going mister?”

Indonesians are experts at having a conversation alongside each other in the traffic, so this question and answer session was all still in motion as we headed off down the road towards “the garden”, which we found out later meant Palm oil plantations.

Now those of you who have been to Asia will realise that an offer like that does not usually come for free. Touts are often on the look out for tired looking tourists needing hotels so you are promptly escorted to a cousin’s or uncle’s house. The touts get a fee and the tourists inevitably pay “tourist” rates. Now at the end of a long day, that all becomes irrelevant. A hotel is all you want.

In Jambi, on the “garden road”, in need of a hotel, we readily agreed to follow this new man in our lives.

After viewing two hotels we finally settled upon a suitable place to rest for the night. It had become obvious that this man was not a tout at all, but another biker of Sumatra.

The brotherhood of bikers have a code that means visitors to their town are welcomed, offered accommodation and generally looked after. We couldn’t believe how lucky we were, meeting another biker wanting to help us and just 15 minutes after saying goodbye to Sam who was on his way home to Medan.

So it was pretty clear that we had a new biker friend from Jambi. We thought  maybe the Blackberry Messenger was in full swing again, but it wasn’t. This was just a pure act of kindness from a single biker who could see we looked a little lost.

Dave was our new guide and what a great guy he turned out to be.

That evening he met us for dinner, brought us a gift of fresh apples and invited us to join him the following day for a tour of the sights of his town. Of course we readily agreed knowing we would be in for a great time.

The next morning we were greeted in the lobby by a group of local community members ready to spend the day with us. So off we rode to Candi Mauro Jambi, an ancient Hindu-Buddhist temple not far out of town. This temple is reputedly the oldest and largest temple in all of Indonesia. The locals are extremely proud of this fact and were keen to show us the way.

Our experience at Candi Mauro Jambi was incredibly special. Borobodur and Prambanan in Java are two ancient temples on the Banana Pancake tourist trail, but Jambi is a relatively unknown site. This is possibly largely due to the difficulty in actually getting there. Sumatra’s road system falls prey to landslides, monsoons and poor infrastructure, so a bus ride to Jambi could be very challenging, but not impossible. Having arrived via the best mode to traverse Sumatra, ‘a la motorbikes’, we were lucky we could visit this special place under the guidance of the local bikers. 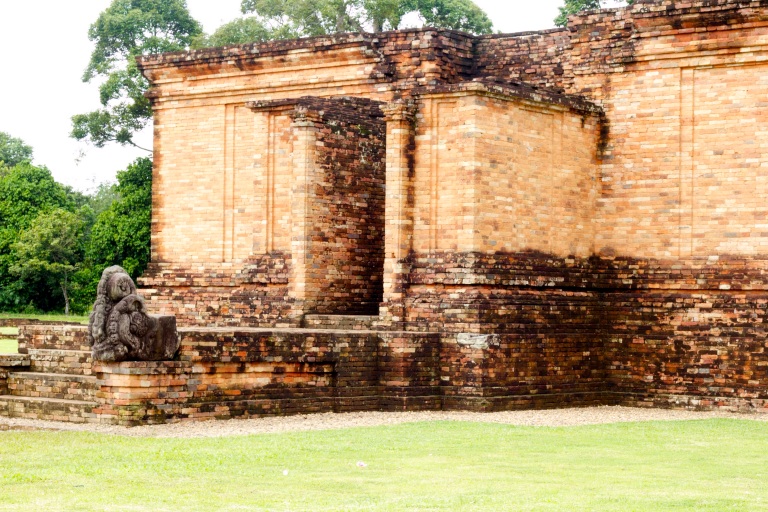 The route to  the temple site is through local villages which receive few visitors and judging by their response to us, very few Western tourists. As a result, we were surprised to find the site busy with a large gathering of Buddhist monks, confirming to us that the temple site is still regarded sacred by Buddhists.

Many of the ancient temples of the world have been reclaimed by the jungle until rediscovery in modern times. Indonesian temples have the added difficulty of having fallen victim to earthquakes and volcanos which leave crumbling masses of bricks awaiting reconstruction. Jambi is no exception having been rediscovered on the banks of the Batang Hari in 1920 by a British army expedition  and is only just being restored. We witnessed the use of sheer human force moving  ancient stones and statues into a new museum at Jambi.

The temples are dated between the 9th and 13th centuries and are reputed to be at the site of the ancient city of Jambi, the capital of the Malayu kingdom. People are free to climb on and touch these ancient relics and so you instantly feel a greater connection to the site than at the highly developed tourist “objects” of Borobodur and Prambanan.

The temple site is spread over a very large area of 12 sq km and  much of it still in the jungle. Concrete paths join the many sites and are also used by the villagers as motorbike ways. So off we went as a group of motorcyclists to visit the other sites of the Candi. The local bikers were fantastic tour guides and we had fun exploring Candi Mauro Jambi and taking many photos. 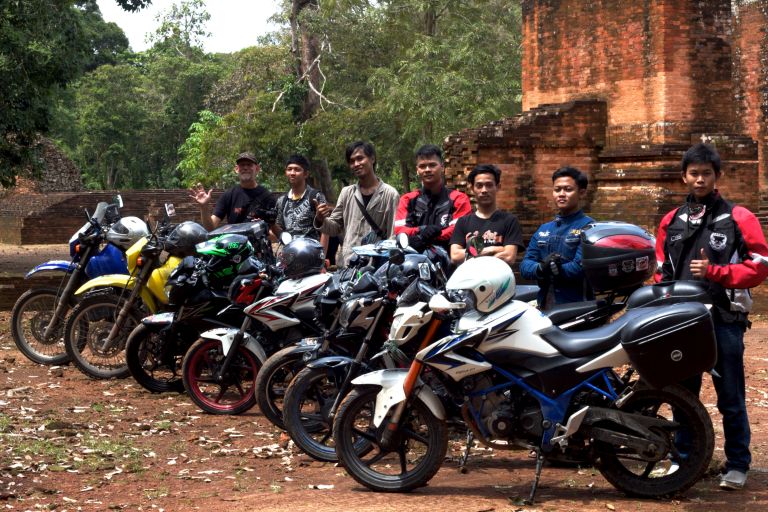 When it came time to leave, a couple of the lads decided the short cut of crossing a flooded footbridge would be a quicker exit than retracing our tracks, but unfortunately it came to grief, as the bridge had large holes in it and down went the first bike and rider. Leaving them to retrieve the wet bike, we retraced our route to meet them back on the main road.

It was lunch time so we headed back towards town with the usual formation and signalling used by the bikers we had ridden with before. The boys were doing amazingly well on the paths given they have road bikes with slick tyres, but they ride them on all road conditions because in Sumatra you have no choice. Reaching a nice piece of road, the “bridge”man opened the throttle only to become unstable on some uneven road and off he came in front of me, sliding along the tarmac. Ending up sliding on top of his bike he was unmarked and unhurt for which we were thankful. Definitely a memorable moment for me who was next in line to him and so was forced to do a very quick reroute around his slide.

The next highlight of our trip was lunch at Dave’s mother’s restaurant for a delicious meal.  The meal was a gift from Dave’s mother, yet again amazing Sumatran hospitality. In addition I was given my first local bike community t-shirt.

Riding out to the Candi was awesome, and having been on a biker-guided tour of Sumatra since landing on the island, we were pretty exhausted  so Dave suggested we enjoy a “free program” day.Thanks Dave. So that’s what we did.

However, a night tour was on the agenda so after our free program day, we were picked up by an even larger group of bikers ready to escort us around the night sights. Pillion passengers we were for the night, collecting more bikers as we went, finally stopping for the best Sate in Sumatra and more photos and sticker swapping. 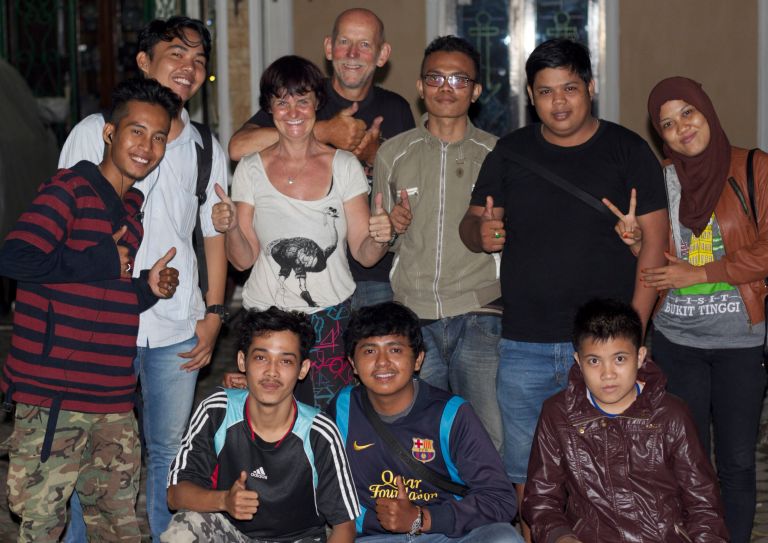 We had made more new friends in Sumatra and in two short days, they were calling us brothers.

Being on a visa-driven schedule to cross the island of Sumatra we planned to leave the following morning after two amazing days in Jambi.

Our goodbyes were given with the promise that  we would write about  the amazing people we had met and the fantastic sites we had seen.

The biker communities people are incredibly proud of their towns and Provinces and their emblems and stickers bear witness to that. Jambi is a great place to visit, but the locals lament the fact that their temple site is not on the tourist trail for Westerners.

In true Community style, once again we were shepherded out of town by a group of bikers, but not before another surprise. Along the way we stopped for coffee and local food at their Base Camp.

We received even more stickers and Con was presented with a Jambi t-shirt and an amazing ring with a local stone which will always remind us of Jambi and the wonderful time we had there.

The kindness of one person seeing us in need of some help had once again grown into an amazing two days of kindness from a group of Sumatran bikers from different communities in the province of Sumatera Jambi.