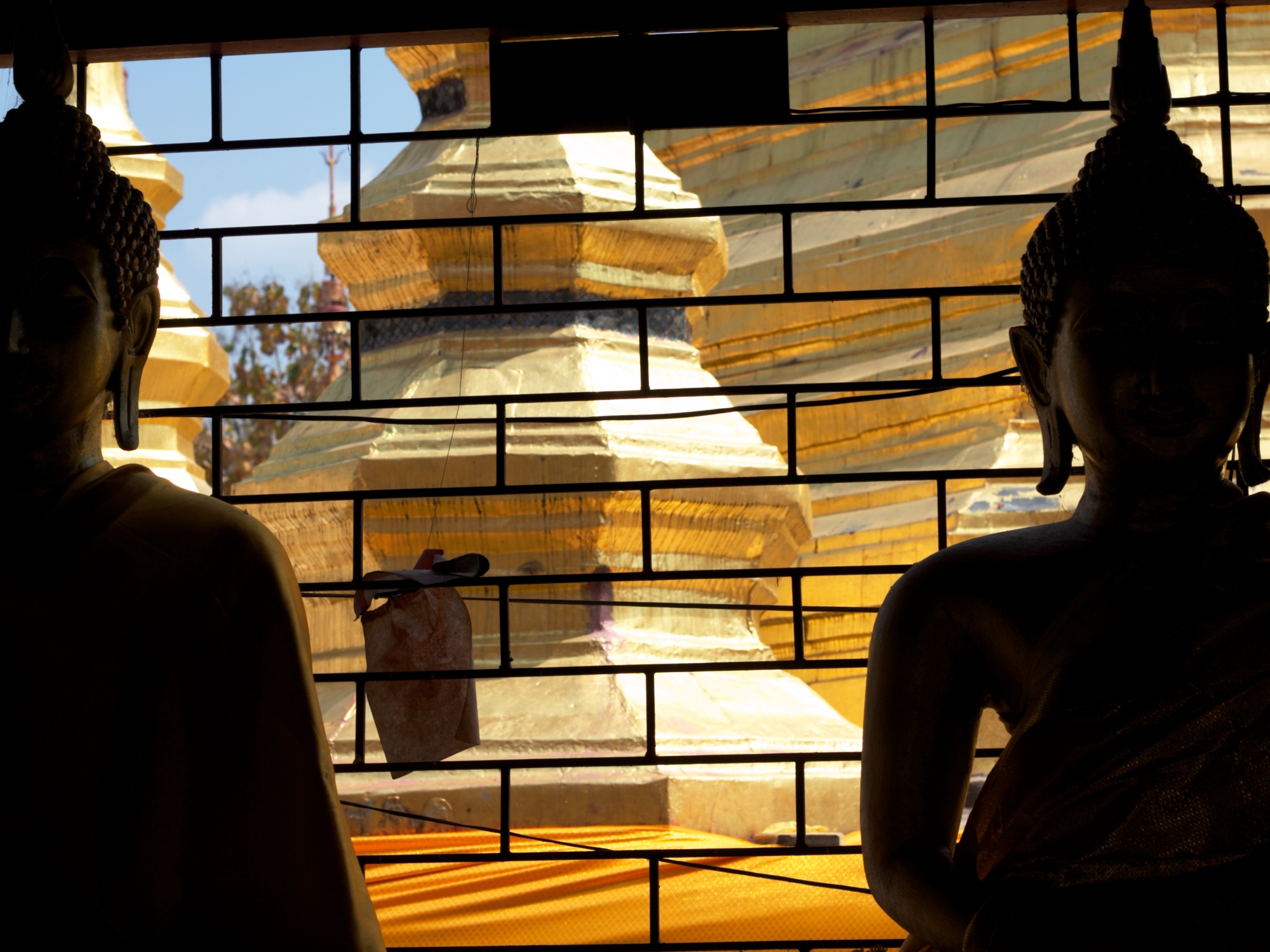 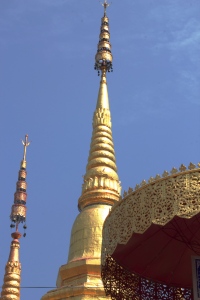 The young, Buddhist monks in their saffron robes were throwing little, colourful packages to the small crowd below.

The usually very restrained, respectful and quiet Thai people were noisily and excitedly trying to grab the brightly wrapped packets as they were tossed down to them.  They were like children at an Easter egg hunt trying to grab what they could. At first I thought they were lollies. 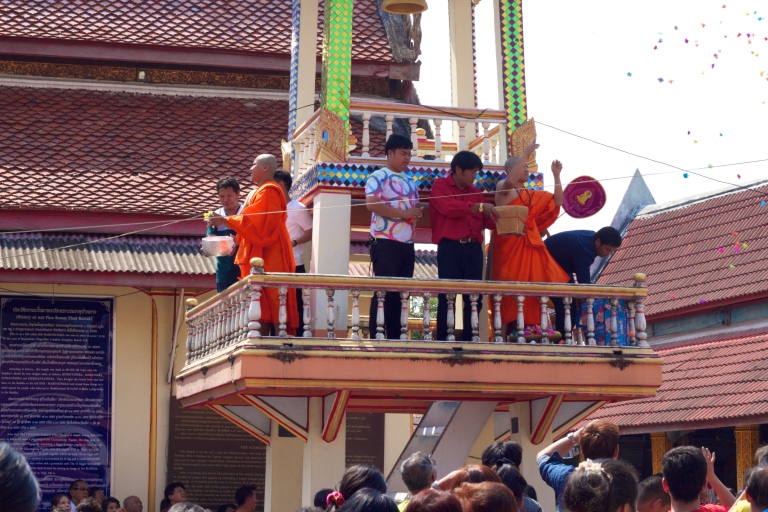 Another lady and I were standing on the edge of the crowd within the temple grounds and every now and then she would, in contrast to the crowd, meekly wave her hands at the monks. A small blue one landed between us and I made a grab for it. Still she had not received a package. In broken English, she explained that new monks were being welcomed into the temple and the packets were for luck. She was being incredibly patient waiting for her special luck.

Maybe I had something to learn here.

Then a green parcel landed right at my feet and I slowly bent down to pick it up, aware that my companion had still not received one. I offered her my second packet, feeling that the first one really should have been hers. She shook her head and said,”No that is from the monk to you. He meant it for you.” I didn’t tell her that I think the first one was meant to be hers and really wanted to offer her that one.

The occasion was the celebration of new monks in the temple. A large community gathering was taking place and a communal feast of food was available to everyone. We had stumbled upon this temple even though we had searched for it the day prior. Heading out of town from Ban Tak towards Mae Ramat on a route less well travelled, we just happened to be on the correct road to find the temple which housed Buddha relics of hairs and bones.

So here we were at the temple I so wanted to find for the day before. Some days things just seem to go well and the universe provides.

It was certainly a grand temple and I felt privileged and lucky to have arrived here on a special day of festivities when the locals were gathered. Now I had my lucky tokens from the Buddhist monk.

We were en route to North Thailand, the area which I was most looking forward to. I have always loved the traditional villages and the hill tribes and was really excited about having the time and transport to travel slowly through this area, very close to the Myanmar border and also China and Laos – the Golden Triangle. There are also many Myanmar refugees in this area and in the next few days we would be passing their villages on our motorbikes.Con was looking forward to the famous twisty Mae Hong Son loop he had done years ago with his son as a pillion and for him, finally some enjoyable roads.

After having visited other places on our interest list, Hell Fire Pass, Kanchanburi and The Bridge Over River Kwai, we felt like we were making progress. We had been plagued with illness and mechanical issues since arriving in Thailand, but now we were on the move again and making miles at last.

The route across the mountains was a quiet one and we were happy to be away from traffic. We were excited to be in  the ‘real’ Thailand as we passed by  large Buddhas and temples atop the magnificent hills in the verdant jungle, and leaving  behind the touristy beach resorts and busy highways. Con rode ahead at his pace whilst I was happy being alone at the back.

It was at one of the roadwork sites that it happened.

Coming around the corner the familiar sight of roadworks awaited me. They love to tear up all of the old tar and replace it in strips, one half of the road and then the other half. So what this leaves is a step up from the dirt to the bitumen. Now I have been caught in this situation before where there is no-one directing traffic, in fact there was no-one around at all. Sometimes traffic approaches you from the same road side and you have to find a place to pull over. I wasn’t sure what half of the road I was supposed to be on and just went with the dirt section.

Then I was fronted by a barricade so I figured I was supposed to be on the new, very wet looking bitumen, but I thought I would just squeeze between the barricade and the step up to the bitumen.

Well a momentary lapse of judgment and I  clipped the edge and before I knew it was over, on the wet  bitumen and my foot was pinned under the steel pannier rack with me on top of the bike! Ouch, I had to try to take my weight off the bike until someone came to help. After what seemed like eternity, help came. My foot was freed, but I knew instantly something was wrong. I managed to get on the bike and ride off, feeling some pretty weird sensations. I also knew it would be swelling and I just had to reach the next village. I am sure the local Thais who helped me up thought I was from another planet. A single female on a big bike wearing a  fluoro jacket, alone, limps over and rides off.

Before long, Con met me along the road, having realised something had happened he had turned around. We made it to Mae Ramat together. By the time we found accomodation, I couldn’t walk on my foot. Fortunately we could buy ice from a little shop house. But I knew we needed a hospital.

So now 3 weeks after having hired a young man to drive me and my bike further up the mountain roads to the city of Pai, I sit in our little village bungalow, laid up in a full cast with a broken foot.

I often think of the two ‘lucky’ tokens still in my camera bag.