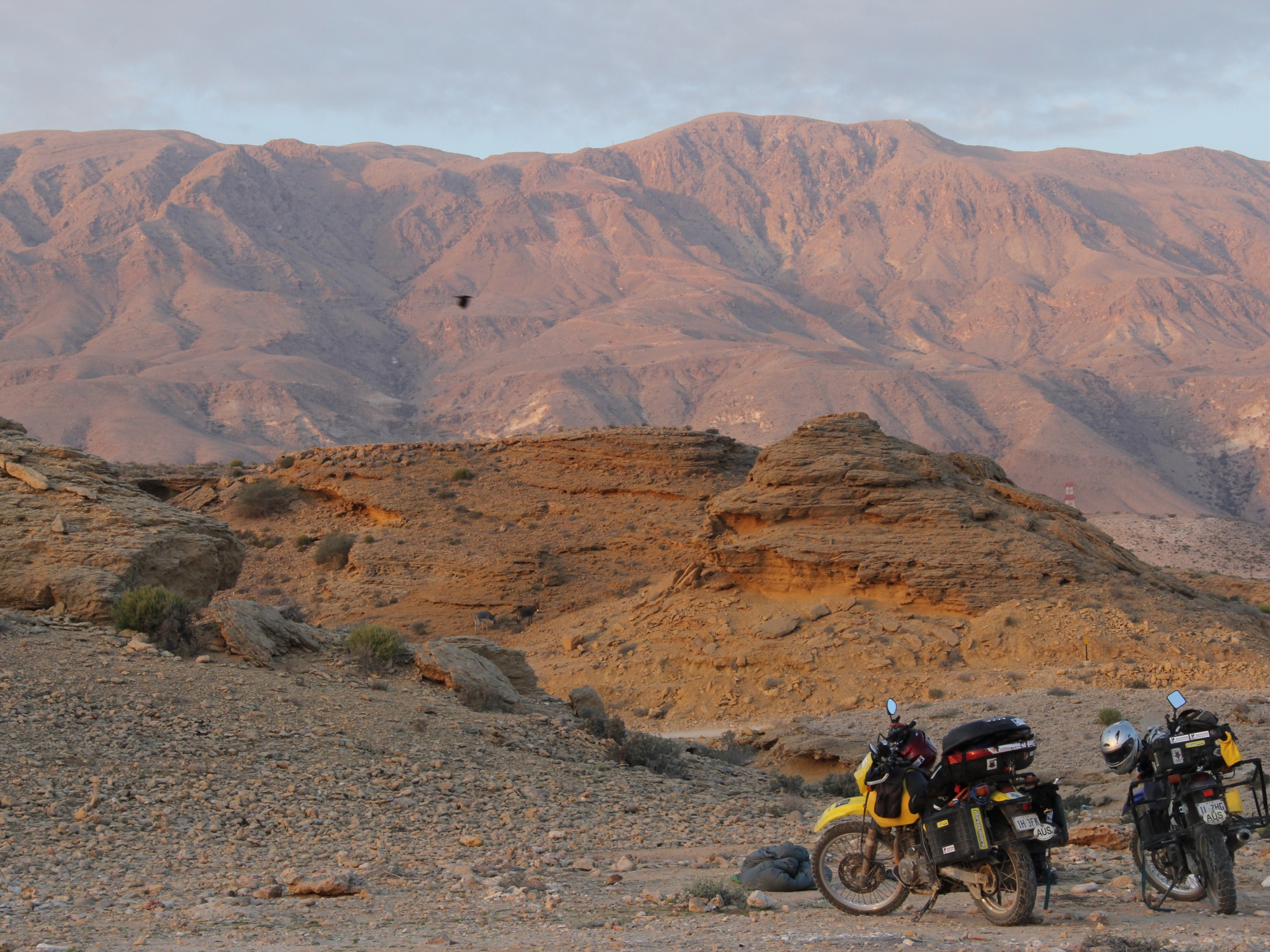 Robert Edison Fulton Junior completed a solo round the world tour on a two-cylinder Douglas motorcycle way back in 1933. One of my favourite parts of his inspiring story is that he left England with a white dinner jacket. It didn’t take long for it to be ditched in an effort to  lighten his motorcycle and ‘unstufficate’ his journey.

Most long-term travellers write about similar experiences of taking too much ‘stuff’ with them and eventually ditching it along the way. A heavily laden motorcycle provides many challenges especially when off road. So it is much like any other outdoor pursuit, light travel is certainly the aim.

We were at the outset very pleased with our minimalist approach to packing but still ended up ditching a lot of gear. Lugging around winter gear in readiness for high altitude riding that was months away seemed crazy, so we ditched it early in the trip.  Postage proved too costly, so we just gifted some pretty good quality ‘stuff’ to deserving locals.

Women can’t quite believe that I travelled for well over a year without a hair brush or comb! That is how minimalist we were.

However, there were a few items we really found we needed and wished we had left with from the outset.

So these are the items we now wouldn’t do without on an extended overland journey. 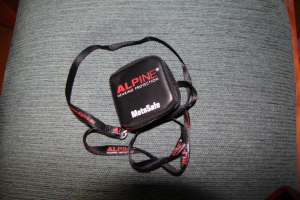 Motorcycling is known for exposing riders to high levels of wind noise at levels that can permanently damage hearing. However, riding through Asia at relatively low speeds, I did not consider hearing damage to be a possibility. My helmet fitted well and most times our speeds were around or below 80 km/hour; a speed where wind noise is minimal.

Upon reflection though, the incessant horn blowing that is endemic all over Asia is probably the culprit for my hearing damage. Endless days of exposure to constant blaring of horns at close range seemed to take its toll. (I even upgraded my own horn to a bigger one in India- maybe that should be added to this list of essentials)

Some people are more prone to hearing damage and I think my hearing was more affected than my partner’s.

Although both of us had compromised hearing before our trip, mine seemed to be more adversely affected. As a result, we both invested in earplugs designed to fit under motorcycle helmets and now we wear them diligently.

This item is a must if you are going to be riding daily.

Sadly, I am now faced with the fact that I need hearing aids! 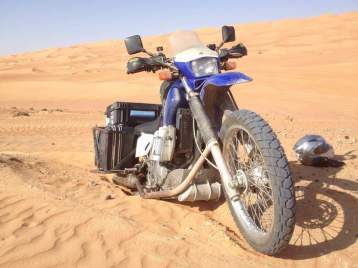 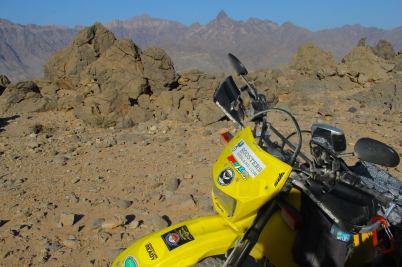 ready to ride with Barkbuster Handguards

Both of our motorcycles were fitted with hand guards before we left. I had a cheaper version of hand guard and Con had an old, but trusty set of Barkbusters (Ego), made and sold in Australia.

It wasn’t long into our trip before I seriously regretted skimping on this essential item. Handguards not only protect your hands in the bush as well as in the event of a fall, but they also protect the levers from damage.

With a fully loaded motorcycle, any drop at all can damage accessories.

Every single time my bike was dropped or even fell over, my hand guards bent like putty, to the extent that my levers were rendered unusable, even wedged on.

The look on my partner’s face when this happened was enough to make me extra, extra careful not to drop my bike. For it always meant, removing the hand guards in situ and trying to reshape them by levering them against anything we could find.

My levers were never broken, but we were forced to fix these cheap, rubbery hand guards in some extremely difficult situations. Relationships can be difficult enough on the road as it is, so anything that adds to the angst must be eliminated.

Barkbuster handguards to the rescue.

So during some down time in Dubai and when I had a mailing address, I explained my predicament to Barkbusters which is based in Wollongong, Australia.

Very soon, I had a beautiful set of Barkbuster Handguards Express posted to us in Dubai. 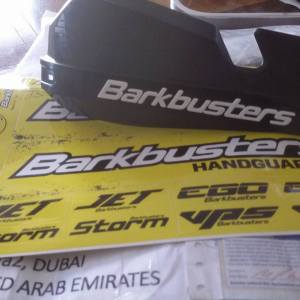 These Barkbuster handguards are everything and more than they claim. I am proud of these Aussie made motorcycle accessories and I would never be with out them!

Now we both have these guards and have every confidence in their ability to take some harsh batterings.

Many hotels on the road have a minimal number of electrical power points for charging electronics. We had a camera, video camera, 2 helmet intercoms, 2 phones, a GPS, a battery pack and a laptop to keep charged.

Some days we had to prioritize and decide what we really needed to charge.

Both motorcycles left with one USB charging point each mounted on the handlebars. However, it often was not enough, especially if we had camped for a few nights in a row.

Part way through the trip, we mounted another double USB port inside a waterproof, lockable top box so that the laptop or other items could be charged on the road or during the evening.

Navigation was one aspect of the trip for which we were naively unprepared. Maps are readily available in Australia and both of us having backgrounds in remote outdoor activities, we just assumed we would be available to pick up road maps along the way.

How wrong we were!

Firstly, we had to ride Timor to Jakarta, 2 months into the trip before we could find anything remotely resembling a road map. Early into the trip, we found a School Atlas out of which we tore the Indonesian map. It was very basic, but at least we had some idea of where we were heading.

We began to use the maps.me app more consistently in Bali, but it took us a while to really understand its great potential.

Initially, we relied on asking locals for directions and that is certainly a great way of getting in touch with the people, but sometimes it didn’t quite work efficiently enough particularly when trying to make the one and only weekly ferry on time.

(Yes, we did miss the one from West Timor as it was difficult to find- but that is another story told in the Lembata blog)

Our first GPS purchase was in Jakarta where we found an Indonesian one for cars (not waterproof) already loaded with maps. Eventually, whilst in Thailand we had a Garmin sent from Australia.

Having two platforms, a GPS and an offline app, for navigating proved to be an effective way of covering all bases. Even though we used Openstreet maps on the GPS, they still often showed different routes and features.

Following the theft of my Shoei helmet in Laos we, rather belatedly, sourced some short, keyed cable locks that we could readily store in our tank bags.

Having the helmet locks on hand ensured that we were less tempted to be lazy and just leave our helmets sitting on our handle bars- as I did one late afternoon in Laos.

Losing a helmet in Asia was a major, major inconvenience, expensive and also a safety issue.

I found out the hard way that it is pretty well one size fits all! No wonder, people in SE Asia often just wear their helmet on their elbow! For someone who wears an XXS size helmet the generic L size just wasn’t going to be a perfect fit.

Following a lot of research on the very slow Laotian internet, I concluded a high quality helmet in my size wasn’t easily found in Laos or even Thailand. So some ingenuity saw me fit out a cheap L size helmet with dish scrubs and duct tape. I eventually sourced a replacement on ebay which was sent via The States.

One lapse of judgment and not only was my budget potentially blown, but my safety was seriously compromised.

Riding around with an egg-shell on my head isn’t my idea of being safe, but it saw me back to North Thailand where I picked up my new Shoei.

Despite being advised by another experienced overlander to ditch my SLR camera in favour of a small point and shoot camera, I chose to take the SLR.

Instead I compromised by taking a 50mm lens as my one and only lens. This proved very frustrating. Having hundreds of landscape photos still sitting in boxes from my last travels, I wanted to focus on people photography, hence the portrait lens.

Not being a seasoned motorcycle photographer, I did not realize how everything becomes about the roads. So my ability to capture those magnificent roads amongst awe inspiring landscapes and mountains was limited by my camera equipment. Later in my trip, a meet up with a nephew resulted in him gifting me his 17-85mm lens and after that the 50mm rarely left my pannier.

Another limitation of course was that a large SLR had to be stored away. Taking a photo meant pulling over and unlocking my topbox- a time consuming procedure especially when travelling with others. It also meantswe have few photos of those really wet, muddy days or difficult roads- the most memorable ones.

The iphone is of course a great addition to your camera gear, but remember it is often being used as a GPS and also unwieldly to take off the motorcycle in a hurry.

Next time, I would definitely invest in a high quality mirrorless camera to carry on my person.

So, six items that definitely won’t be left behind on our next trip…wonder where that will be?

What essentials did you add to your kit whilst away?